The Boondocks Wiki
Register
Don't have an account?
Sign In
Advertisement
in: Characters, Comic/TV characters, Main characters,
and 9 more

"You can't have my wife!"
—Tom DuBois

Thomas Lancaster "Tom" DuBois is one of the two tritagonists (alongside Jazmine DuBois) of The Boondocks.

He is a mild-mannered black lawyer, with a white wife named Sarah and biracial daughter named Jazmine. He was an assistant district attorney before becoming a defense attorney, and is a close friend of Robert Freeman.

Tom is portrayed as a loving family man, who is very close to his white wife and biracial daughter Jazmine. Tom's hobbies include singing and playing the piano, and he once dreamed of becoming a successful recording artist, though his wife and friends detest his singing.

He also played basketball on his Ivy League college team, at Princeton University but, as Sarah points out, he was mostly a bench warmer. His most notable moment on the team was taking a charge from Chris Webber to defeat the University of Michigan and the Fab Five, but is known in infamy as the "Giddy Up, Ride 'Em Cowboy Dunk." His failures as a player along with the influence of The Mighty Ducks film leads him to coach a Woodcrest youth basketball team, though in two years they have failed to produce a win. He is depicted as somewhat of a goober and a wet blanket in social situations, since he seems unable to truly lighten up.

He and his wife are active members of the NAACP and believe they have a strong understanding of the struggles of African-Americans. This leads them to be strong supporters of the Obama Presidential Campaign. However, his actions and lifestyle are often portrayed in direct contrast of the black community, such as his fictionalized role as prosecutor in "The Trial of R. Kelly." His is also temporarily convinced by Uncle Ruckus in The Passion of Reverend Ruckus that he is a self-hating Black man, recalling several Black figures (including P. Diddy, Kobe Bryant, and Usher) that he can not stand.

Tom, being non-confrontational and skittish by nature, adheres strictly to the law, particularly due to his irrational fear of being sent to prison and anally raped as explained in the episode "A Date With The Health Inspector". This fear originated when Tom was exposed at a very young age to a TV series that depicting a violent prison rape. The fear developed to such a degree that Tom refused to participate in even the slightest of legal infractions (even those that are not punishable by a prison sentence) as a youth and throughout adulthood, and is a reoccurring theme throughout his appearances in the anime. He eventually confronts his fears in "A Date With the Booty Warrior" with the hopes of becoming a defense attorney.

Sarah is Tom's attractive white wife, with whom he has a daughter, Jazmine. Their relationship is often portrayed as boring, Sarah dissatisfied with Tom's dull personality and Tom finding Sarah usually insufferable. This leads her to be obsessed with famous Black musicians, such as Usher and Pretty Boy Flizzy, as well as U.S. president Barack Obama. In spite of this, their marriage is generally loving and stable. Though, it seems as of the events of the episode Pretty Boy Flizzy, their marriage seems to have improved better, and they have seem to have started becoming more sexually active with each other.

Tom's biracial daughter. Tom enjoys a close and loving relationship with his daughter, although he shelters Jazmine quite a bit.

Huey respects Tom on an intellectual level, but is more proactive and confrontational in his approach to the Black struggle, and generally questions to what degree the NAACP helps African-Americans. Furthermore, Huey views Tom as part of the white power structure that he detests (i.e., part of the "system"), due to his wealth and stringent adherence to the legal system that puts many Black people into prison on exaggerated charges. When Tom is in need and his grandfather and brother refuse to assist, Huey is often the one to give in and help him, though he is usually reluctant and his advice is often blunt. Huey usually is the one who gives Tom legal advice.

Riley's interactions with Tom, meanwhile.are few and far between. Huey shows Tom respect as an elder. Riley, as with most adults he encounters, does not, and this leaves him prone to clash with Tom as he often clashes with his own grandfather.

Robert and Tom seem to be good friends and are often seen hanging out, though Robert does not always hold the deepest respect for Tom, citing his lack of masculinity and reputation as a social buzzkill. Tom, however, trusts Robert and often turns to him when trouble befalls him, much to Robert's dismay. However, It can be agreed upon that Tom is probably Robert's most trustworthy friend. Though probably not the most loyal, since he abandoned the Freemans in Freedomland, probably due to the neglect, emotional mistreatment and apathy he received from them.

Much like Robert, Tom and Ruckus have an odd friendship due to Ruckus' pathological disdain of Black people. Ruckus seems to hold more respect for Tom than other Black people, due to his lighter skin color, occupation and education, and most importantly his white wife. Like the rest of the Black cast, they just seem to find Ruckus insufferable. 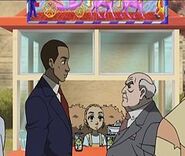