The Boondocks Wiki
Register
Don't have an account?
Sign In
Advertisement
in: Episodes, Season 2, Episodes with Tom DuBois,
and 7 more

"Thank You for Not Snitching"

"Tom, Sarah and Usher" is the second episode of the second season and the seventeenth episode overall of The Boondocks. It originally aired on October 15, 2007.

Sarah and Tom split after an unexpected appearance by Usher causes an infatuated Sarah to put on a girlish display at their anniversary dinner. Tom, chagrined, is kicked out of the house and attempts to learn assertiveness from A Pimp Named Slickback.

Tom Dubois and his wife Sarah are celebrating their anniversary at a restaurant. Tom, enjoying himself, seems oblivious to his wife's relative disinterest. Sarah perks up quickly when Usher enters the restaurant. Tom, thinking her enthusiasm is for him, sings "Sara Smile" to Sarah, embarrassing her. Afterwards, Usher (voiced by Affion Crockett) comes over and sings to her the same song, and he and Sarah hit it off, taking many pictures together and having a good time, leaving Tom to mull over his dinner alone.

On the drive home, Tom confronts Sarah about her flirty behavior, likening her girlish behavior to that of their daughter Jazmine (who is also an Usher fan). Sarah, enraged, demands that he stop the car. She walks home.

The next day, Tom is visiting the Freemans, explaining to Granddad, Riley, and Huey about all that had happened the night prior. Riley and Granddad encourage him to go lay down the law and assert his role as man of the house, which he attempts to do. Naturally, this goes horribly wrong and he returns to the Freeman house sobbing with bags in both hands. He is reluctantly taken in by the Freemans. While alone in the spare bedroom, Tom proceeds to sing "Burn," by Usher, daydreaming that he is making a music video while doing so (to the chagrin of Riley and Granddad, who both tell him to "shut the fuck up").

When Robert decides that Tom needs to go, Riley offers a suggestion: hire A Pimp Named Slickback (from "Guess Hoe's Coming to Dinner") to give Tom a crash course on assertiveness towards women, explaining that Tom was suffering from "chronic bitch dependency". Robert uses Tom's credit card to pay the pimp a $2,500 honorarium for this course.

A Pimp Named Slickback takes Tom to his palatial home and tries to teach Tom that he can extort respect from women by hitting them and tells Tom to refer to his wife as a "bitch". He pits Tom against "Sweetest Taboo" (voiced by Miss Kittie) one of his prostitutes, who begins to treat Tom very disrespectfully. When Tom refuses to hit her, she promptly begins to savagely beat him up. The lesson is interrupted when "Quiet Storm," a prostitute who works A Pimp Named Slickback's extensive surveillance network, reveals that Usher and Sarah have agreed via her MySpace, which Tom did not know she had, to meet that very afternoon. Finally showing a little spine, Tom angrily demands that A Pimp Named Slickback take him there immediately. The pimp decides to, impressed that the "n***a" can get some bass in his voice after all.

Arriving at the scene (The Woodcrest Chateau Hotel), Tom sees Sarah, Usher, and two of Usher's burly bodyguards. Boldly walking up to them, he grabs Sarah by the arm and demands that she leave with him, stating: "Sarah.. I mean.. biiitch, get your ass in the car!" When she refuses, he draws back his hand, clenches his fist as though about to strike her, but instead he smacks Usher and tells him that he cannot steal his wife from him. Usher looks at him, flabbergasted. Jazmine, who Tom did not realize was there, begins bawling that her father has brutally attacked her idol without provocation. Sarah then explains that the reason she was meeting Usher was so that their daughter could meet her favorite singer. She was never having an affair with him; Tom simply overreacted. Usher and his two bodyguards then set on him and begin to beat him viciously while Sarah tells them to stop, but they ignore her.

Jazmine, still in tears, cries apologies to Usher (apparently not caring that her father is being pummeled), while A Pimp Named Slickback prudently exits the premises quietly. While getting pummeled, Tom cries that he has "never felt so much pain!" and Usher says to Tom while assaulting him to "shut the fuck up, Tom". 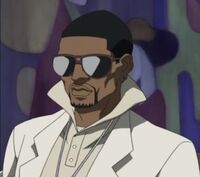