The Boondocks Wiki
Register
Don't have an account?
Sign In
Advertisement
in: Episodes, Season 1, Episodes with Tom DuBois,
and 6 more

The Trial of R. Kelly

The Trial of R. Kelly

The Trial of R. Kelly is the second episode of The Boondocks. It premiered on November 13, 2005. R. Kelly goes to trial.

When the Trial of R&B singer R. Kelly comes to town, Huey and Riley are on opposite sides of the hot-button "underage peeing" issue.

The episode opens with Huey, Granddad and Riley watching TV. Granddad switches the channel to The O'Reilly Factor where Bill O'Reilly talks about R. Kelly's latest legal trouble revolving around a tape that he made of himself urinating on a 14 year old girl. Riley asks Granddad if they can go to the city and see the trial. Granddad declines, commenting that Riley's new Nikes cost enough that they can carry him the 40 miles to the courthouse just fine.

On the way to the courthouse, Riley and Huey encounter Tom Dubois (his first appearance in the show). Tom says that he hopes the boys aren't angry that he has to prosecute R. Kelly (Tom is the assistant district attorney). Riley, sporting a "Free R. Kelly" sign, gets into a spirited argument with Tom, bringing up possible reasons why finding R. Kelly guilty would cause more problems. He also brings up the alleged victim's personal responsibility, claiming that her free will (i.e. her decision to let R. Kelly urinate on her) shouldn't mean the world missing out on R. Kelly's next album. Riley concludes by threatening to urinate on Tom's cat. Tom is left speechless, to which Huey comments, "You just got beat by an 8 year old..."

At the courthouse, there are two groups of protesters. The first has three people in suits resembling Cornel West, Tony Brown, and Dick Gregory with well-phrased signs protesting the exploitation of a minor. The second crowd has people grilling on barbecues, listening to R&B and holding crude signs with frequent misspellings demanding that R. Kelly be set free (e.g. "We Luv Yu R Kelly" and "Not Gilltee"). A news reporter asks one of the Kelly supporters (voiced by Crystal Scales) why she believes he is innocent. The large woman licks barbecue sauce off her fingers and says, "'Cause he good!" The reporter turns to Riley and asks him why he supports R. Kelly. As Riley speaks, Huey yanks his brother off camera, instigating a riot between the R. Kelly protesters and supporters, which is finally ended when R. Kelly shows up in his Hummer limo.

Meanwhile, Granddad is spending the day in the park with Uncle Ruckus playing checkers. They discuss the trial and its possible ramifications on black culture and society as a whole. Ruckus takes this opportunity to expand on his theory of white supremacy. He mentions the Kobe Bryant trial, and how white women are irresistible. He talks about this so intensely that he begins sweating. He later reveals his complete love of white people, complete disdain for black people, and that he believes he has a skin condition called "re-vitiligo, the opposite of what Michael Jackson has" that continues to darken his skin. Granddad leaves in anger after hearing Ruckus' attitude toward blacks, though later returns to give him a ride while he picks up the boys from the trial.

In the courtroom, Tom Dubois presents his case — a well documented case backed up by a video tape of the act, testimony by the victim, and DNA evidence for good measure. R. Kelly's lawyer (played by Adam West) presents a different view: All of that evidence is really "racism".

This argument, though preposterous, seems to appeal to the crowd and the jury. R. Kelly's lawyer continues to play the race card every chance he gets. He points out that though R. Kelly may have urinated on a minor, the victim was black, which indicates that R. Kelly is sexually attracted to black women. Tom objects to this argument. Kelly's lawyer replies "Your honor, I'm trying to establish to the court that my client is a proud black man who loves his black sistas. Unlike District Attorney Dubois... who's married... to a HWITE WOMAN!"

Tom tries again and again to appeal to the common sense of the jury, but fails. Recognizing the hopelessness of the situation (he's lost favor with the crowd, the jury, and the judge), he begrudgingly rests his case, defeated. R. Kelly's lawyer stands up and says that there is nothing left to say, so he starts playing some R&B music. R. Kelly leaps on a table and starts singing and the whole crowd dances...all except for Huey and the Dubois family.

Huey switches off the boom box and angrily addresses the crowd. Despite Huey's impassioned plea for sanity, Riley quickly breaks the moods by booing and decrying Huey's arguments. The music is turned back on and R. Kelly is set free. Seeing Tom in full defeat, his wife Sara lovingly teases him about losing the case from messing around with white women. Huey does the one thing he realizes he can do in this situation on the ride home... He blames white people. 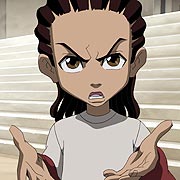 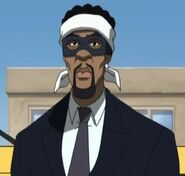 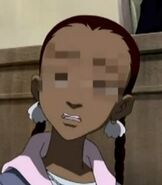 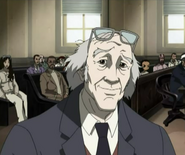