The Boondocks Wiki
Register
Don't have an account?
Sign In
Advertisement
in: Episodes, Season 1, Season finale,
and 6 more

The Passion of Reverend Ruckus

The Passion of Reverend Ruckus

"The Block Is Hot"

"The Passion of Reverend Ruckus" is the fifteenth episode of The Boondocks. It originally aired on March 19, 2006. It is the final episode of the first season.

Uncle Ruckus has a dream of white heaven and is diagnosed with cancer. He spends the rest of his days preaching about the white man. Huey plans a scheme to bust out a unjustly imprisoned inmate.

The episode starts in Uncle Ruckus' dream in which he goes to Heaven. He is met at the gate, not by St. Peter, but by Ronald Reagan. Reagan tells Ruckus that this is "White Heaven" and that there are several separate, but relatively equal Heavens, one for each type of person (although he seems to be hinting that White Heaven is the best). Ruckus, being a self-hating black man, asks what he has to do to come to White Heaven. Reagan tells him that spreading the message of White Heaven and White Jesus will earn Ruckus a place in White Heaven. Ruckus looks at his reflection in a nearby pool and sees that he has been transformed into a blond, blue-eyed white man. Ruckus awakes and sets out to spread the "good news."

Meanwhile, Huey and Jazmine are having a meeting to discuss plans to visit Huey's friend Shabazz K. Milton Berle, who is on death row. Shabazz had worked as an intern for the Black Panther Party in 1970 and had been doing some paperwork when he heard a gunshot outside his window. Shabazz then heard a man shout that he had committed a murder, identifying himself and dropping the weapon at the scene (with his fingerprints clearly marked in chocolate frosting from the donut he had been eating, and with the registration tag attached). A court stenographer happened to be there to record this oddly specific confession, as well as the dying man's last words, which also implicated the killer. An amateur home video of the act confirmed this as well. Despite all of the evidence that cleared Shabazz of any wrongdoing, the jury convicted him and sentenced him to death.

It is revealed that Huey has been corresponding with Shabazz, who is sentenced to die soon. Huey tells Shabazz that he sent a letter to the governor threatening to reveal his gay affair, reasoning that if 10% of the population is gay, and 50% cheat on their spouse, this plan has a 5% chance of success.

Ruckus, meanwhile, has started preaching. He will park his car in front of passers-by and tell them that if they are white, they will go to Heaven. Being that most of the population of the town are white, this message goes over quite well. Robert and Tom hear the message and ask Ruckus if he's feeling alright. Ruckus was diagnosed with a tumor on his back and doctors say that soon he will die, but in his remaining days he wants to spread the word about how black people can redeem themselves and gain admittance to White Heaven through hating their own blackness. Robert tells Ruckus to stop being stupid, but the message spreads and Ruckus gets on television and even gets his own revival meeting at the local sports coliseum.

Huey is still working on a prison break plan that he calls "Operation Black Steel" (despite Jazmine's insistence that it should be called "Jazmine and Huey's plan to get his friend out of jail"). Huey expects to die in the attempt to free Shabazz, but feels that the cause is greater than his own life. He hugs his brother goodbye, (prompting Riley to comment, "N***a, you gay") and climbs down the stairs to meet with his destiny. His plan is thwarted at the last minute when Robert tells him he cannot give Huey a ride to the prison, having decided to go with Tom to Ruckus' revival and try to talk some sense into him.

Huey ends up on a hillside and, as a last resort, falls to his knees and begins praying for Shabazz. This is the only instance in the series in which Huey has been shown to cry. The governor, reading Huey's blackmail letter, panics over the thought that news of "Raoul" has leaked out. As he reaches for the phone and Tom begins to fall under Ruckus' influence, Ruckus declares, "If any of my words don't come directly from the almighty God himself, then may I be struck by lightning right this very instant! Hallel-" At that moment, a lightning bolt does strike him, blacking out most of the city in the process. The prison loses power at the exact moment that the switch is thrown to execute Shabazz; once the lights come back on, the phone rings and he calmly says, "Would somebody like to get that? I think it's for me."

Ruckus has lost his flock, no one willing to follow a man who God himself seems to have branded a liar. The lightning cured Ruckus' cancer as well. Huey says that doctors would find no remaining signs of his tumor. Also, Raoul is revealed to be the homosexual lover of the Governor Huey had risked exposing. Even though Shabazz is still in prison, Huey considers his mission a success for now. 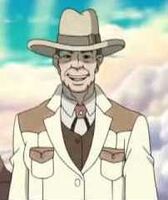 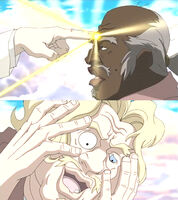 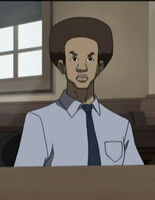 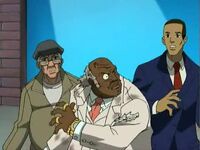