The Boondocks Wiki
Register
Don't have an account?
Sign In
Advertisement
in: Episodes, Season 3, Episodes with Robert Freeman,
and 6 more

"The Story of Lando Freeman"

"Lovely Ebony Brown" is the eleventh episode of the third season of the Adult Swim original series The Boondocks. It originally aired on July 11, 2010.

The episode begins with Granddad deleting his Facebook page. He has given up looking for women on the internet after many failed dates with crazy women.

After a talk with Tom and Uncle Ruckus about women, he meets a nice, intelligent, and gorgeous woman in the neighborhood named Ebony Brown. He immediately falls for her, though decides to take it slow (following Huey's advice to be himself), in order to not ruin this relationship.

After a nice dinner with her, which involved an argument with a bathroom attendant and Ruckus making many racial remarks toward Ebony, he realizes that she is perfect, and the two begin dating. She is revealed to even be part of an organization which cured Patterson's disease. Everything is perfect for him until he starts listening to Riley's advice, which eventually leads to Ebony telling Granddad they should take space.

Granddad falls into a deep depression, but snaps out of it when he hears she is in Malaysia. He decides to go to where she is in order to win her back, thinking she has run off with another man. But Ebony was simply in Malaysia to help with a recent Typhoon disaster. She said she tried to call him through cellphone but couldn't reach, since she's on the other side of the planet in a different place. Ebony sees the effect she is having on Granddad and says that they should end the relationship, to which Granddad reluctantly agrees.

Back in Woodcrest, Granddad starts a new Facebook page that he chooses to fill only with the truth of his lifestyle hoping to meet another woman like Ebony.

Leonard Pierce of The A.V. Club graded the episode a B+, complimenting it as "surprisingly sweet, funny, and well-developed", and singling out Gina Torres's guest role and character and lamenting that she would not return.

Ebony Brown makes several comments throughout the episode that indicate her character is a vessel of commentary on The Boondocks TV series by an outside viewer, or possibly Aaron McGruder himself. Examples of this are: 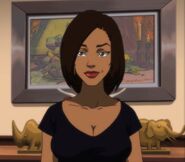