The Boondocks Wiki
Register
Don't have an account?
Sign In
Advertisement
in: Rewrite, Episodes, Season 3,
and 4 more

You can help The Boondocks Wiki by reading the manual of style and then revising the article.

"The Color Ruckus" is the fourteenth episode of Season 3 and the forty-fourth episode overall of The Boondocks. It was aired on August 8, 2010.

The episode flashbacks many years in the past with a white man who rushing to the birth of his child on the Fourth of July. The doctor sadly declares that the black patch on the baby's arm is an incurable skin disease that will spread over the child's body and make him indistinguishable from a negro. Horrified of that prospect, the man snatches the baby and runs all the way to a river, where he is about to drown the baby except a police patrol spots him. He manages to escape and leaves the baby on a random doorstep with some money. A black couple - Bunny and Mister Ruckus - comes out of the house, the man flees the scene, and the couple finds and adopts the white baby to raise as their own (this story is later revealed to be false).

In present time, Uncle Ruckus finds out that his grandmother, Nelly Ruckus, will finally die any moment now and came to Woodcrest to do so. Unable to put up with her, Ruckus flees to the Freeman house and amuses them with the tragedy of his childhood. It is then revealed that his white supremacist mother, Bunny Ruckus, was the one who convinced him he was adopted and actually a "great white man" suffering from a skin disease called re-vitiligo which made him appear black. Ruckus was also constantly singled out for physical abuse by his "adopted" (but in truth biological) father, Mister Ruckus, while his mother Bunny continued to specially teach him to be pro-white.

At the end of the story, Nelly, furious about Ruckus leaving her alone in his shack, invades the Freeman household to die in the comfort of Robert's recliner. Uncle Ruckus' family then comes to the Freeman resident to see her die. Overjoyed to reunite with her long-lost son, Bunny tells Ruckus that all good things going on in his brothers' lives, one of them working for and getting promoted by a white boss, the other running his own business and getting married to a white woman; Ruckus is overjoyed and proud of them until his bitter father insults him for accomplishing nothing in his life, making him not white but a Mexican. In his anger, he reveals that Uncle Ruckus' adoption and re-vitiligo was a lie Bunny made up to improve Uncle's self-esteem, and the true reason he hated Uncle was because Uncle's conception forced Mister to marry Bunny and reduced him to working a string of abusive jobs to feed his growing family of "honkatonks", killing his plans and any chance of him finding happiness or joy for the rest of his life. This upsets Ruckus so much he leaves the room in tears, regrouping with the Freemans upstairs and finishing his tragic tale of how his father, enraged by the verbal abuse of his "dying" mother, mercilessly threw him out the house and him confusingly receiving several injuries in the process. Surprisingly, this makes the Freemans weep over the story and feel sorry for him (except Huey, although he declared the story Academy Award-nominated sad). Ruckus' brother Darryl finally comes upstairs and announces that Nelly died on Robert's recliner while all this was going on, upsetting Robert that she had to die on his "living-chair" (it is hinted that the chair is then destroyed by a chainsaw). As the family leaves the house, Bunny reaffirms that Ruckus is indeed adopted and white, disclaiming Mister's confession with a remark that "we darkies are a mess".

The next day Ruckus is seen working at the graveyard and is greeted by his brothers, who help him dig their grandmother's grave. When Uncle asks about Mister's hatred of the world, his brothers reveal how their father was abused by the white man he worked for, taking his dignity, sanity and humanity. Darrel comments that their father abusing them was perhaps his misguided way of trying to toughen them up for a tough world. Then, the funeral begins and Mister again acts inappropriately, sickening Ruckus to the point he stands up to him, accusing Mister of abusing him because Nelly abused him as a child, too. Ruckus declares that Mister's attitude to them is getting old, and snaps at him to "get it all out of your system and sit down and shut the f*** up", shocking everyone at the funeral. Mister becomes furious and attempts to beat his son with his bottle, but the constant beatings he took from the past flare up exclusively in his back (where he took the most abuse), and he ends up falling into his mother's empty grave and breaks his neck, killing him (and fulfilling Nelly's second wish, that Mister would reach the grave before her. Technically Nelly's wish wasn't fulfilled because when she meant that she wanted her son to reach the grave first probably meant she wanted her son to die before she did). Bunny Ruckus is overjoyed now that she can marry her white lover, Uncle Ruckus is sorry his father never learned to love the white man, and the Freemans walk home, Robert satisfied to see the end to the tragic Ruckus' story. Later on, Ruckus bids goodbye to his family and concludes that he shouldn't hate blacks for being black, but decides to feel sympathy for them being inferior to whites. His last comment is that as far as darkies go, his adopted black family is okay. 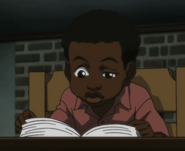