The Boondocks Wiki
Register
Don't have an account?
Sign In
Advertisement
in: Characters, Comic/TV characters, Main characters,
and 8 more

"I Dream of Siri"

Sarah DuBois is a major character in The Boondocks.

She is the white wife of Tom DuBois and mother of Jazmine DuBois.

Sarah's grandmother had Patterson's disease, which was cured by the organization Ebony Brown was in.

Sarah is shown to be much more frisky and lowkey than Tom, which leads to strains on their relationship - such as when he refused to "lighten up" and have a "little extra wine" on their anniversary due to his prison rape phobia: "A Date With The Health Inspector".

While it seems that Sarah has extremely little to no respect for Tom and seems to "regret" marrying him, she does in fact love him. She "dominates" the marriage and acts as the reigning authority in the household. She also displayed a considerably self-centered side as she blatantly flirted with other men such as Usher while knowing how much it upset Tom.

Sarah, like her husband, is liberal and fiercely political. She focuses her efforts on political action against the conservative parties. She is extremely usual about her interracial marriage, even going so far as to joke about it when Tom is mocked and attacked for it.

She was, however, embarrassed when a lawyer accused Tom of hating black women simply because he was married to her. Sarah is a member of the NAACP and a self-proclaimed "crusader for Black rights". She and Tom have also clashed over her support for Ralph Nader.

Although she openly loves Tom, Sarah is revealed to be somewhat frustrated due to his lack of confidence, uptight attitude and inflexibility. She appears to fantasize about stronger, successful black men like Usher and Michael Jackson. Despite this, she does reveal concern for her husband on several occasions, such as "A Date With the Booty Warrior" and "The Fried Chicken Flu".

In "Tom, Sarah and Usher", a memory revealed Tom and Sarah having sex with each other. However, while Tom was shown as exhausted and sweaty, Sarah was on the other side reading (with glasses) and revealed without any signs of fatigue, implying no sexual satisfaction on the latter's half in their marriage. Though it appears that after having their marriage improved as of the events of "Pretty Boy Flizzy", their libido for each other has increased, especially since Tom loses his fear of being raped, making him somewhat less afraid of going all out.

Stinkmeaner once took control of Tom's body and (realizing that this attractive white woman was Tom's wife) explained Sarah of his desire to have sex right now. Sarah appeared rather surprised and somewhat delighted to hear that, asking her possessed husband just what got into him, with Stinkmeaner saying an innuendo as the same thing that was about to get into her. He then carried her into the bedroom, and they had sex with each other, with Sarah having an enjoyable orgasm in "Stinkmeaner Strikes Back". 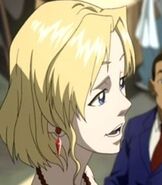 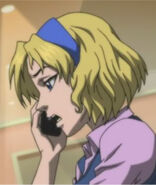 Sarah and her daughter, Jazmine. 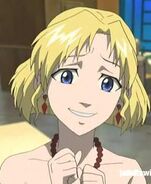 Neither her or her husband are too happy 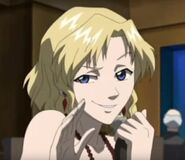 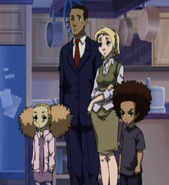