The Boondocks Wiki
Register
Don't have an account?
Sign In
Advertisement
in: Rewrite, Characters, Comic/TV characters,
and 10 more

"You wanna be in this business, you got to pay the cost of doing business, and when the cost gets too high, you get out of business."
—Riley Freeman

Riley Freeman is one of the two main protagonists (alongside Huey Freeman) of the 2005 Adult Swim animated TV series The Boondocks.

He is Huey Freeman's younger brother and Robert Freeman's youngest grandson. He is an 8–year-old who emulates the gangster lifestyle. He and many others commonly refer to him as "Riley Escobar", "Young Reezy", and "The Fundraiser".

Riley is most notably shown having long cornrows braided towards the back. He has brown eyes, wears a white tank top, blue pants, yellow timberland boots or he sometimes wear a white tshirt with a maroon long sleeve shirt underneath it like he did in some episodes in season one. He looks identical to Huey Freeman in the face as both of the brothers look alike. During the season 3 episode The Fundraiser, he sports different attire.

You can help The Boondocks Wiki by reading the manual of style and then revising the article.

Riley is a highly impressionable third grader. He embraces the stereotypical "gangsta" lifestyle, doing his best to promote the urban culture in the contrasting suburb of Woodcrest. Influenced by the mass media via rap music and television, he frequently uses poor grammar, and tends to defend his idols even when his imitations go against common sense and righteousness. One example is his support of R. Kelly in "The Trial of R. Kelly", despite overwhelming evidence proving Kelly's guilt, Riley believes he should not have to miss out on his next album because of Kelly going to jail. This is further shown in "The Story of Gangstalicious Part 2" where he dresses in effeminate clothing only because Gangstalicious created the style. He also refused to believe that the rapper was gay despite the obvious clues to the contrary. In an effort to further emulate the lifestyle he praises, he collects airsoft weapons and tags houses, as demonstrated in "The Garden Party" and "Riley Wuz Here".

Riley seems to have a fair amount of criminal aptitude, as is demonstrated when he helped plan the kidnapping of Oprah Winfrey, and further demonstrated by his criticisms of Ed Wuncler III and Gin Rummy for their lack of criminal know-how in "Let's Nab Oprah".

Despite his pretensions to the contrary, Riley is as intelligent as his brother. In several instances, he is shown to be very resourceful and pragmatic, and "beats" Tom, a district attorney, in an argument over R. Kelly's confinement and trial. Perhaps due to idolizing the gangsta rap lifestyle he seems to have a level of street smarts possibly as great as his brother, often able to manipulate situations through lying and reverse psychology. Which he refers to as getting into someone's "mental mind". Riley is quite brash and could often get into situations without considering first, also making him a trouble maker. He is also quite rebellious and does not listen to anyone, especially Huey and Granddad. He is brutally honest to the point of being very rude.

Riley overestimates himself extremely. Believing himself to be phenomenally skilled in basketball but in reality having no such talent. The same was seen in kickball.

Riley seems to take great pleasure in poking fun at other people, sometimes to the point where Huey or Robert have to hit him to make him stop, although such disciplinary actions usually have no effect on his behavior. He also holds grudges; he has a grudge, for example, against Santa Claus for not getting him what he wanted for Christmas back when he lived in the ghetto, and went so far as to stalk and assault Mall Santa's with airsoft guns ("A Huey Freeman Christmas").

Riley's excessive interest in the "thug" lifestyle has made him into something of a misogynist. He claims that all women are "hoes", pointing to the custom that a man should pay for his girlfriend's dinner during a date - despite, as Huey points out, that men are actually paying the restaurant, not the woman - a contradiction that Riley does not recognize. He also tends to use "bitches" as a general term for women.

Unlike other characters in the series, Riley has a notorious tendency to drop the N-word on almost everyone, regardless of their skin color. His fight with Butch Magnus and interview with Werner Herzog are two examples.

Riley sometimes overestimates his own combat abilities, such as when he tried to fight his brother in "Let's Nab Oprah". His thuggish fighting style, both with weapons and hand-to-hand, has failed several times against the precision of Huey's martial arts ability. He does seem to have some talent with airsoft guns, as he fought Huey to a tie in season two. It can be shown that he has a strong amount of endurance and determination, seen when he receives many harsh attacks from his opponents but is able to continue fighting, seemingly ignoring his injuries to a certain limit.

All in all, even though his opponents are far more experienced than him (either by size or martial arts), in all fairness, however, his fighting skills seems to have improved, ever since his fight with Lamilton Taeshawn. As of season 4 he has shown to be acrobatic, by somersaulting in the air (with great precision) to turn one of the lights off. It is currently unknown if his acrobatic skills are the result of one of his maneuvers to hide from unwanted neighbors/people or if he learned some martial arts from Huey.

Out of the three members of the Freeman Family, Riley is considered the least experienced fighter.

Huey and Riley tend to have a regular brotherly relationship despite their contradictory personalities. Riley looks up to his older brother due to how he beats up people. An example of this would be in the episode "It's Goin Down", when he reveals to Huey that he and Robert Freeman were watching Huey being apprehended on the news, stating: "You was lookin' hard too!" Due to the blunders Riley makes, Huey inevitably tries to teach him the error of his ways, but often to no avail. When their grandfather is not around, Huey usually will not hesitate to set Riley straight himself. In "...Or Die Trying" Riley does not have any problem with abandoning his brother to his fate, but in other episodes he seems to trust him. Despite all this, Riley often insults his brother with the repeated phrase "N**ga, you gay," usually after receiving a hug (although he just distanced himself from Huey without him doing anything while speaking those words in the episode "...Or Die Trying"). Huey quite often has to come to extreme physical force when trying to keep Riley in line.

Riley in line, but Riley seems accustomed to this kind of disciplinary action to the point where it does not influence or change his actions in any significant way. Riley seems to not understand his grandfather's rules and gets whipped when he makes a bad choice. They are shown to be close at times and agree on things in season 2.

Riley hangs out with them and refers to them as his "n**gas" (despite both being white) because they are the closest thing to a gang that exists in Woodcrest. They have a great variety of real firearms and are free to commit any crime they wish since Ed's grandfather essentially owns the city. Riley sometimes accompanies them on their various misdeeds, and is not afraid to point out when their crimes are poorly-planned, are only successful because of Ed's family status. However, Rummy dismisses Riley's reasoning and says they get away with crimes because he (Rummy) is a criminal mastermind. However, they tend to use him for their own personal gain, such as stealing his Granddad's car with the knowledge that Riley will not reveal they did it, then when it was eventually returned, they stole his new bike, fitted with rims riding as they shouted: "Thank you for not snitching!...You stupid motherfucker!" Riley also contacts Ed when he needs additional muscle, such as when he tries to get his Lethal Interjection chain back from Bitch Magnus (Butch Magnus) or when he and Huey need to seek out the Xbox Killer.

Riley likes to make fun of the Dubois family – especially Tom. He mocks Tom's un-manliness, breaks Jazmine's beliefs, and makes fun of Sarah's cooking. He outwits Tom, an attorney, in an argument about R. Kelly's trial and makes fun of Tom's fear of being anally raped in prison. He also mocks Sarah's cooking by comparing her peach cobbler to vomit with peas in it. He hates and fights with Jazmine when she does not listen to him, like when she did not give him lemonade when it was only a dollar he says "I ain't got no dollars." However, it seems apparent that Riley and Jazmine have a decent friendship, as seen in the Episode "Ballin," she was cheering for him when playing on the team that Tom coaches.

episode "Ballin'". Cindy and Riley were initially rivals on different basketball teams in the local league, but in "The Story of Gangstalicious, Part 2", Granddad invites her over to play with Riley, signifying a small amount of friendship. In the episode, "The Fundraiser", Cindy becomes a business partner of Riley's and helped him and Jazmine. She used her stereotypical ignorant kid image to sell large amounts of chocolate in order to make money for Riley's fundraiser. Also, in "The Fundraiser", Riley stated that one of the things he really likes about Cindy is that she has "less compassion than the average girl."

Riley has a deep dislike for the large, white 12 year old Butch Magnus (to whom he refers to as "Bitch Magnus"). The reason for his dislike is that Butch had snatched Riley's platinum and diamond chain that he received from Thugnificent. Another reason that Riley does not like to Butch is that every time Riley attempted to get the chain back he was beaten and bloodied in front of others.

Riley does not necessarily hate Santa, but believes that Santa robbed him of the gifts and happiness that other kids got when he and Huey lived in the ghettos of Chicago. Because of this, Riley took up the persona of the "Santa Stalker" and sends hate and threat mail and assaults the mall Santas every Christmas season until he gets, what he feels, he deserves or as he so eloquently puts it "till' that n**ga pays what he owes." His already fragile belief in Santa was broken completely when all the Santa actors were too scared to come to the mall (due to Riley's attacks) and Uncle Ruckus dawned the costume. However, when Ruckus consoled Jazmine, who also lost her faith, that was enough to rekindle Riley's belief, and to Ruckus' dismay Riley attacked him to tell him to send Santa a message that he would return next year. 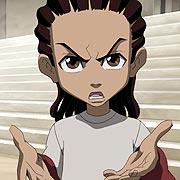 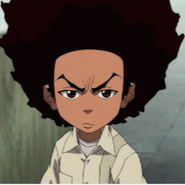 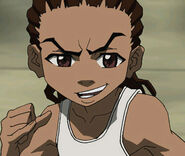 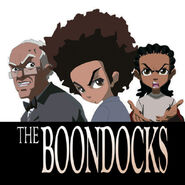 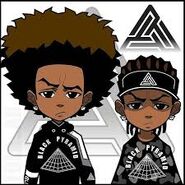 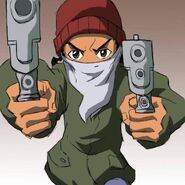