The Boondocks Wiki
Register
Don't have an account?
Sign In
Advertisement
in: Characters, TV-only characters, Recurring characters,
and 9 more

"What the fuck are y'all lookin' at?!"
—Ed Wuncler III

Stinkbomb (in the Army)

Ed has shown his stupidity in remembering people on two occasions. Riley once asked him to reclaim a chain Thugnificent had given him from Butch Magnus; however, Ed ended up kidnapping the wrong kid despite being given a picture. When Hateocracy threatened the Freemans, they asked Ed for help, but he blindly attacked people using a van and machine gun.

His character could be seen as a parody of a young George W. Bush — a figure destined to be president on the strength of his family's wealth and power, despite his sub-average intelligence (as referenced at the end of "The Garden Party", where his grandfather says, "In 30 years, that boy will be President of the United States... and he'll still be a fucking idiot!"). Ed's bling includes a large medallion in the shape of the letter W. Ed III and his friend, Gin Rummy, get away with their misguided and comically inept criminal antics because Ed Wuncler has the police and everyone else in the city on his payroll, and because his status as a member of the U. S. Armed Forces confers the public image of a hero no matter how immoral his actions may be, while Gin Rummy often argues that their escapes are the result of his being a master planner. For example, the pair go unpunished when staging a poorly executed bank robbery; Ed and Rummy are seen as heroes when they rob a convenience store owned by a person of "terrorist descent"; in attempting to kidnap Oprah Winfrey, they mistakenly abduct Maya Angelou, then Bill Cosby instead.

A known running gag in the series is that every time a shootout happens when Ed is there, each time Ed gets shot, he always has something protecting his chest from getting him killed to a high degree of luck, even narrowly missing a bullet to the heart thanks to a medallion, to getting shot point blank in the chest with a shotgun by Riley and Grandad, usually getting up saying his notable catchphrase "What the f*ck are y'all looking at?" 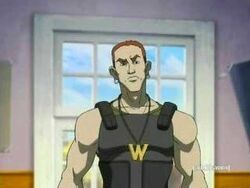 Ed III in the first episode, "The Garden Party"