The Boondocks Wiki
Register
Don't have an account?
Sign In
Advertisement
in: Characters, Comic/TV characters, Recurring characters,
and 6 more

Cynthia "Cindy" McPhearson is a girl who originally appeared as a recurring (minor) character in the comic strip. In the strip, Cindy shares Huey's classes and appears oblivious to racial issues. She enjoys rap music, especially Snoop Dogg. In the TV series, she is best described as a South Central ghetto girl who happens to be white. Cindy is an extremely talented junior basketball player, the team star who is well-versed (yet overblown) in AAVE and just as cocky as Riley, who, contending against Cindy and eager to obtain upper hand, resorts to reveal stuff about Cindy's mother and publicizing personal problems, which leads to Cindy's crying and running off the court. Appears in the episode "Ballin'" and "The Story of Gangstalicious Part 2", in Season 2 and in Season 3 in the episodes "The Red Ball" and "The Fundraiser" and other episodes.

Cindy is a talented junior basketball player and a girl scout. Despite being a little girl, her behavior and speech are more like that of a teenager. Cindy is usually portrayed as very tough, but she showed a more fragile side in the episode "Ballin'" when she ran off the basketball court crying after Riley insulted her mother and brought up problems with Cindy's home life. In "The Funraiser", she panicked during a gunfight and shouted "I WANNA GO HOME!"

Sometime between "Ballin'" and "The Story of Gangstalicious: Part 2", it appears that Riley and Cindy have become friends, though it is never shown when or how. Much like Jazmine with Huey, it is hinted that Cindy may have a one-sided crush on Riley. Evidence for this might include:

It is notable that in "The Story of Gangstalicious: Part 2", Granddad chose to invite Cindy to the Freeman house (rather than the closer friend to the family, Jazmine) to try to extinguish what he believed was Riley becoming gay. His choosing of Cindy over Jazmine, however, may only have been because he knew Riley did not particularly like Jazmine and may have thought he'd have more success with Cindy. Additionally, because this is the first interaction between the two since "Ballin'" it may evidence that Riley had since made it known to Granddad that he considers Cindy a friend. Despite his Gangsta belief in staying away from "Hoes", Riley does seem to consider Cindy a friend since it's obvious they share many of the same views of the world.

In the comics, Jazmine and Cindy are best friends. Although Cindy opinion's of the black culture often leave Jazmine confused (especially when she talks about Jazmine's ethnicity), the two get along great. In the series, the two have never interacted. The only instance where they had was in "The Fundraiser" where the girls were helping Riley build his chocolate empire. This was only time the girls have interacted.

Cindy is shown to have friends in the Girl Scouts. They seem to be her followers more than her friends, and slightly less brutal than she; however, however, as Cindy is beating up a competitor cookie seller, they idly stand and watch the attack, then chase the rival cookie-seller as she flees from Cindy. The blonde girl who informed Cindy of the rival seller even held the girl's head while Cindy repeatedly slapped her so she could not run away. Grey DeLisle voiced the African American girls and Mona Marshall voiced the blonde Caucasian girl.

Cindy in her first apperance in episode "Ballin" 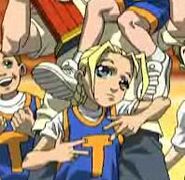 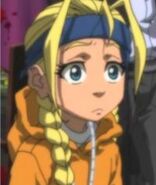 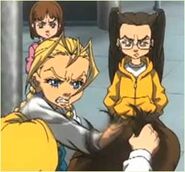