The Boondocks Wiki
Register
Don't have an account?
Sign In
Advertisement
in: Episodes, Season 3, Episodes with Tom DuBois,
and 6 more

A Date with the Booty Warrior

"A Date with the Booty Warrior"

The Story of Lando Freeman

"A Date With the Booty Warrior" is the ninth episode of the third season of the Adult Swim original series The Boondocks. It aired on June 27, 2010.

The episode begins in 2005, as The Booty Warrior enters a child's house and is approached by To Catch a Predator host, Chris Hansen. The Booty Warrior reveals that he didn't really want sex with a child but Chris Hansen himself and tells him that's why he was here. He says his well known phrase "I like ya, and I want'cha. Now we can do this the easy way or we can do this the hard way, the choice is yours". The Booty Warrior reveals saying he doesn't care about the cameras or police that Hansen has waiting for him and tells him to make his decision as it will happen no matter what. Hansen tells him that he doesn't want anything to do with him, the Booty Warrior says Hansen has chosen the hard way but Hansen has become annoyed so he turns around shouting "Cut" to get the latter out. The Booty Warrior then becomes angry and tackles Hansen, easily pinning him to the counter. The police enter and he is arrested, but not before fully sodomizing Hansen, his balls dumping their load deep inside the show host.

The episode then fast forwards 5 years in 2010 when Tom Dubois is hoping to help Huey and Riley and other young students from going to prison and being violated by putting them in the "Scared Stiff Program"; a program where troubled juveniles go to the prison and interact with several of the prisoners learning how life in prison will affect them in hopes of "scaring them straight". One of the prisoners uses Tom as an example of what the prison system does to people. He forces Tom to strip almost completely naked and the Booty Warrior seen earlier in the episode sees that Tom had a sharpened toothbrush and places it in his pocket. He then takes his turn and explains how important Booty is in prison and tells Tom the same phrase he told Chris Hansen. Tom, terrified by the man's manner is unable to answer. The Booty Warrior takes this as Tom is choosing the hard way and holds him at knife point using the sharpened toothbrush. Multiple guards come in and Tom uses a self defense technique he learned in therapy to free himself and immediately runs off to look for safety. As a result, a prison riot starts with hundreds of prisoners easily taking down and possibly raping many of the guards.

The Booty Warrior complains that Tom ran away and has a brief argument with the prisoners. The group, held hostage, feigns about not knowing a successful escape plan. Annoyed, the Booty Warrior attempts to find Tom so he can rape him. Tom realizes that when he helped Uncle Ruckus and the white children escape from the prisoners holding them hostages, that they had left Huey and Riley behind. Tom, feeling responsible for letting the prisoners take the children hostage decides to go back to save Huey and Riley with Uncle Ruckus telling Tom to look out for the peanut jelly prisoner saying he has peanut allergies. After seeing a group of prisoners, Tom rushes to the showers. Before he can see him, the Booty Warrior is then heard saying "Tom come out to play".

The Booty Warrior, completely naked except for his green hat, walks through the steam of the shower room and starts throwing multiple bars of soap at Tom. The two begin to fight and Tom does surprisingly well but the Booty Warrior gains the upperhand, due to his great resilience and strength. He starts walking towards Tom confidently but humorously slips on a bar of soap hitting the back of his head. Tom grabs the soap that the Booty Warrior slipped on, Tom screaming "You can't have it!" and throws it at the Booty Warrior's defeating him and consequently fully conquers his fear of prison rape.

After this the prisoners notice that Uncle Ruckus and the white children are gone and decide that they won't have any statistic leverage with only two children and give up. One of the prisoners tells Huey that after spending so much time in prison, he deeply regrets his actions that put him in jail and always wishes that things could have been different and the only thing he can do is to rape other inmates for the rest of his life. Tom then rushes in but sees the prisoners gone and asks if they're okay which Huey replies they are fine and asks Tom if he's doing alright and replies yes, showing for the first time that he's okay and that he can now live his life more happier and free now that he had beaten his lifelong fear that heavily influenced his life.

Leonard Pierce of The A.V. Club graded the episode a B. Pierce called it "a flawed episode, but still a vast improvement over its season 1 predecessor" but found it to be "a bit of a step back from the rolling thunder of the last month or so, with a bit too much padding and a pretty trite confrontation at the end, but only in comparison -- it's better than most of what we got in season 1, and certainly isn't a loser".[1] 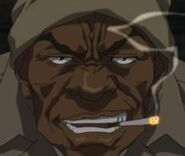